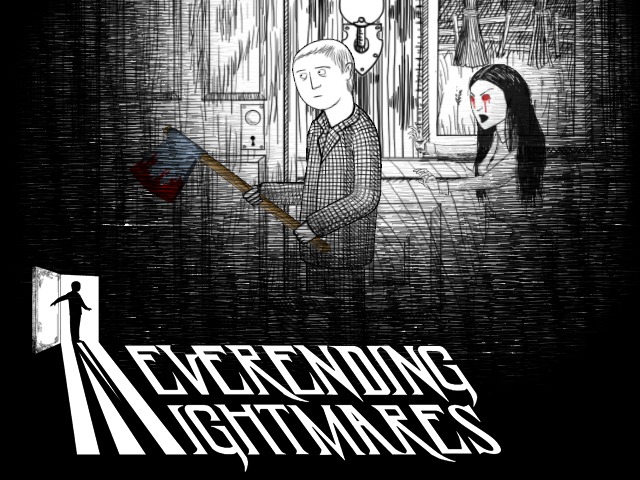 Let me get the general ruling out of the way first: this is a great game from a new and promising voice in the indie horror game scene. It tries new things and often does them by its own rules (quite effectively, I must say), while also following in the footsteps of tried and true horror classics. It’s not for everyone, but fans of personal, artistic, exploratory games as well as fans of atmospheric horror (as opposed to action/survival-based horror) should buy, enjoy, and support it. You can currently buy it on Steam for PC/Mac/Linux or on Ouya (haha…).

That said, the game is not without its flaws, and a number of them have to do with pacing.

Hallways sometimes seem to go on a touch too long without much happening. It’s a strange feeling, getting bored by a horror game. Luckily, several times I felt boredom creeping in, something terrifically terrifying would happen and put my ass right back on the edge of my seat where it belonged. Perhaps these moments would not have been as effective without the moments of calm, but I feel that the game would have been more, not less, effective if a few of the rooms or hallways would have been cut.

That’s not to say that all of the “pointless” rooms should be cut. It’s kind of wonderful to be walking down what seems like a cookie-cutter hallway, enter a side-room, and find some new, unexpected, grotesque scene that, while serving no clear ludic function, ramps up the chills significantly and sinisterly.

By the end of the game, though, the player will likely become a little desensitized to blood and guts intended to convey scenes of horror. At the beginning, the bright sight of red blood against the beautifully pencilled black and white is a shock and reminds us that not all is well in this mansion. By the end of the game, there seems to be more red than white at times, and it becomes just another part of the macabre scenery.

Don’t get me wrong, though; throughout the game, the gore is often used to wonderful effect, throwing guts in our face when we least expect it. While I’m not usually a fan of cheap jump-scares, this game does have a few, and they don’t at all feel cheap. In fact, I think each and every one was superbly executed.

The art, overall, is quite nice. The way the seemingly-hand-drawn shadows scribbled their way over the light is a very cool effect and works well in the nightmarish context. The set-pieces and enemies in particular have frightening designs, especially as the game descends deeper into madness.

One enemy, though, just wasn’t particularly scary or fun to deal with. Luckily it doesn’t show up very often, but a few of its behaviors seemed to be a bit out of place with the rest of the games. While another, later enemy hit the sense of adolescent terror just right, this one was more obnoxious and almost silly. Other than the one, though, the enemies overall were extremely effective from both a gameplay and horror perspective. 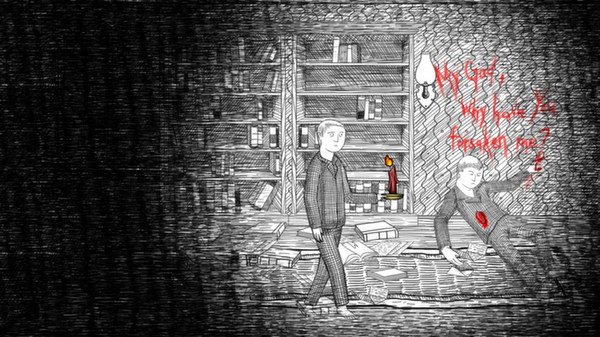 The sound design and music are quite lovely, if you can call it that… aside from a few background ambience that sounds like someone doing an impression of a tortured Droopy Dog. I appreciated the way the music would evolve over the course of the different nightmares and a “new” nightmare’s beginning would be indicated by a shift in the music as much as the narrative.

The endings (the two of three that I’ve played, at least), while narratively intriguing in their own rights, seem to happen just a tad too quickly and feel like they lack the weight I think they deserve. With this kind of short game I don’t feel necessarily like closure is what’s needed, but the credits seemed to start rolling quite quickly and suddenly, as if someone came into a movie theatre after the last words had been spoken and hurried the audience out so they could make room for the next group or something. That said, I like that the endings don’t necessarily agree with each other. They all come from the same background, but come to different conclusions of varying depth that indicate what’s really going on here, and I think that was a smart and cool decision.

Overall, there’s a lot to praise in this game. It’s at its best when it embraces nightmarish weirdness to try to throw the player off track, changing placement of rooms and playing with expectations. The lead developer, Matt Gilgenbach, has referenced Metal Gear Solid and Silent Hill as influences, and in this way they both shine through, but without becoming overbearing. If there’s an ultimate takeaway, it should be that this game is a unique experience that I highly recommend. Also, supporting this game means supporting future titles from the developer, and personally I’m very excited to see what Gilgenbach and Infinitap does next.

What did you think of the game? Let me know in the comments below.